Do you agree codependency can kill?

Codependency; “I have a friend who says her codependency will kill her before her alcoholism. I am so codependent that when I do, I’m afraid someone else’s life will flash before my eyes.

I am completely consumed by a dear friend’s terminal illness. I don’t like the way his caregiver is handling his care. I desperately want to jump in and tell his caregiver how to do things because in my spare time – when I’m not leaping  tall buildings in a single bound – I am an oncologist, a child psychologist, pain-management specialist and super-model.

That’s how sick I am. I have the best intentions but my execution is a little off. It is obsessive caretaking. We form one-sided relationships with people who need care – such as my friend, who has cancer. The care-taking becomes compulsive and pathological.

Codependency is a learned behavior, often seen in the spouses and children of alcoholics and addicts – like me. We are often called “enablers.” We want to fix people and relationships and when we can’t, we cover for them. We make excuses for them, we smooth things over and shield them from their own destructive behavior.

We are fixers. We become so obsessed with solving someone else’s problem that it becomes our own. When we can’t fix things, we take on a martyr’s role and become “benefactors” to those in need – even when those in need are self-absorbed, narcissistic drunks and addicts who need to be kicked out on their asses, cut-off and forced to face the consequences of their own behavior.

The collateral damage of growing up in a co-dependent environment is that we put on our super-hero capes when anyone with a problem crosses our path – like my friend with cancer. I want to jump in and demand that his caregiver call hospice – NOW.

Making the situation even worse is that I know I’m doing this. I’ve been in therapy for my co-dependency. I am watching myself twerk the hell out of my codependency and yet I can’t stop. I am holding the hand that holds me down.

My friend is being cared for by the caregiver he has chosen. His decisions are being respected. Today, I must take off my cape and respect reality.”

I think this article by Psych Central is thought-provoking, what do you think? 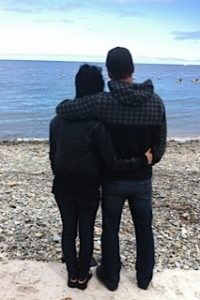